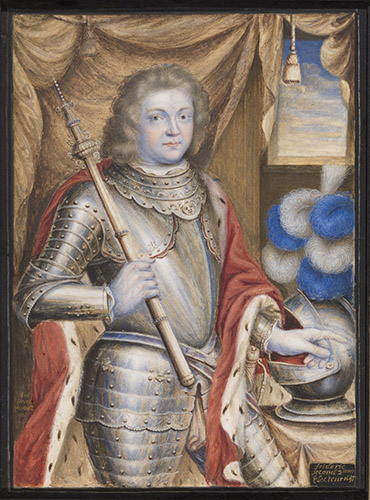 The picture shows the ruler in 1697, at a time when he held the directorate of the protestant church in Kursachsen. He was handed this post from elector Friedrich August I. of Saxony (August the Strong), who had been forced to convert to the catholic belief after his election to the Polish throne.

Finely executed and with attention to detail, this miniature equals a jewel. This satisfied the vision of the portrayed in an elaborate armour. He counts, like his father, as "…a supporter of French conventions and vogues who loved brilliance and splendour, and through which he aimed to heighten his baronial prestige" (1). Both brothers had been working together since 1686, the same year they had moved to Berlin and in which they were appointed as court painters under the patriarchy of Friedrich Wilhelm, elector of Brandenburg (1620–1688). After Amy had left Berlin in 1690 to return to Geneva, Jean Pierre received double the salary of 400Reichsthaler. He only had to deliver the court two miniatures a year. Simultaneously he worked on several private commissions. Fritz Lemberger states in his to this day valid standard volume on portrait miniatures in Germany (Berlin 1912), that the Huaut brothers had been jointly working on these miniatures over distance. This seems to be the case here as well.

This particular miniature, like the portrait of King Friedrich WilhelmI as young boy (1688–17402), was sent to Geneva to be completed by Amy Huaut before being returned. Lemberger, like Steinbrucker, writes about their different types of signatures. Their precisely decorated portraits and miniatures on works of art "show fresh, glowing, however cold acting colours" (3). Nowadays, they are kept in various museums (4). This miniature jewellery was especially well received at the beginning of the last century and was highly paid for and was located, as mentioned above, in renowned collections. Among these collectors in Germany, the art historian Fritz Friedländer owned two miniatures on pocket watches 5. The impressive execution and the comparable large format make our miniature an exception in the oeuvre of the artists.